Anybody contemplating writing a memoir needs to read Katherine Graham's Personal History. I almost passed on this 600+ page memoir, it seemed excessive for an autobiography....who remembers that many details of their life. Of course, most of us haven't lived a life like Mrs. Graham's. It was published during my Watergate phase, so I picked it up anyways, figuring I'd read a few chapters then skip to the WoodStein sections. Instead, I found myself captivated by the extraordinary life of this woman, from girl to Washington institution. Graham has told the story of her life as just that a story, and she's told it with an objective frankness not usually found in an autobiography. This reader found herself turning each page and wondering just exactly what was going to happen next. Don't pass this up just because you don't like memoir; I'm glad I didn't. It is well worth the time.
Posted by Country Girl in the City at 1:01 AM No comments:

Another signer from humble roots that would start a political dynasty was Jacob Broom. Broom was born in Wilmington, Delaware in 1752 to James Broom and Esther Willis. James was blacksmith, who also did well trading in real estate, silver, and gold. Esther was a Quaker.

With his skills as a mathematician and as a penman, Jacob became a surveyor. Among his many projects, Broom drew the map used by General Washington at the Battle of Brandywine. As the son of a Quaker, Broom took little part in the revolution, but played an active role in the development of the state of Delaware. A few of his many roles include Burgess and Chief Burgess of Wilmington, Assessor, state legislator, and the first postmaster of Wilmington.

Broom owned a machine shop, built the state’s first cotton mill, mined iron ore, played a role in the building of the Brandywine Canal, and chaired the first Board of Directors of The Bank of Delaware. He was a also a land developer. [sidebar – the DuPont family purchased their lands from him].

On 14 December 1773 Broom married Rachel, the daughter of Robert and Elizabeth Pierce. Jacob and Rachel would have eight children. Two of their boys would grow up to serve in the U.S. House of Representatives. One of their grandsons would run for president in 1852 as the Native American (aka Know Nothing) party candidate.

Broom died 25 Apr 1810 in Philadelphia at the age of 58. He is buried in the Christ Church Cemetery.
Posted by Country Girl in the City at 1:01 AM No comments:

Hot summer days. It's that time of year again. When the only sensible activity is one that doesn't require much movement. Whether you prefer to be propped up under a tree, sprawled in the sunshine on the beach, or just smack in front of the a/c, a Stephanie Plum adventure is just the way to go. Stephanie is a fly by the seat of her pants bounty hunter. The situations that she encounters stands her mother's hair on end and has her sometimes boyfriend, Trenton cop Joe Morelli, guzzling antacid. Her mentor in the bond enforcement game, Ranger, has her listed as an entertainment expense in the Rangeman budget and occasionally puts her on staff to keep her safe. Light and funny, Janet Evanovich has put together an entertaining cast of characters and situations to keep readers laughing out loud. I'm not sure which book is my favorite. Nor can I answer the ever present question....Morelli or Ranger? Can you?
Posted by Country Girl in the City at 1:01 AM No comments: 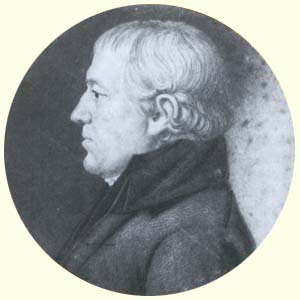 The son of a tavern keeper, Richard Bassett was born 2 April 1745, at Bohemia Ferry, Cecil County, Maryland to Michael and Judith Bassett. Michael Bassett would abandon his family and Judith would send Richard to be raised by a relative, Peter Lawson.

Bassett was educated in Philadelphia, studied law under Judge Goldsborough of Maryland, and received his license to practice law in Dover in 1770. In September 1775, he became a captain in the Kent County Cavalry. After serving the state constitutional convention and serving in both houses of the state legislature, Basset resigned his senate seat in 1793 to the first Chief Justice of the State Court of Common Pleas.

On March 3, 1801 President John Adams appointed him US Circuit Judge for the Third Circuit, which served Pennsylvania, New Jersey, and Delaware, making him one of the group of “midnight judges” whose judicial seats were eliminated with the repeal of Judiciary Act. Instead of returning to the bench, Bassett became Governor.

Bassett was considered wealthy for his day with homes in Dover and Wilmington, Delaware and Bohemia Manor, Maryland (p. 201). Initially, his property was maintained through the use of slave labor; however, Bassett freed his slaves and then hired them as laborers.

He died 15 September 1815 and is best remembered for his contributions to the development of his chosen church; he was a Methodist. I found no information on his wife and only one mention of any children. His daughter Ann married Senator James A. Bayard and one the early political dynasties was born; two of Bassett’s grandsons and a great grandson would also become senators.
Posted by Country Girl in the City at 1:01 AM No comments: 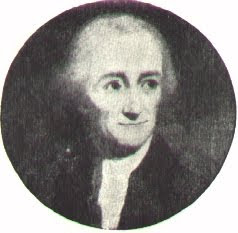 Delegation leader, George Read was born 18 Sep 1733 in Cecil Co., MD to John Read and Mary Howell. John emigrated from Dublin, Ireland after the death of his fiancé and was one of the founders of Charlestown, Maryland. Mary’s family emigrated from Wales to Delaware. John and Mary moved their family to New Castle, New Castle Co., Delaware while George was still a boy.

One author describes him, “In person, he was tall and slender with a finely moulded head and features, which while refined, were yet expressive of strength, and eyes that were brown and lustrous. In manner he was dignified, and though very reserved, courteous and agreeable. In dress he observed the nicest punctilio of a day nicer than our own in matters of attire [Conrad, History of the State of Delaware, p. 946]”.

On January 11, 1763 he married Gertrude Ross Till, a widow. Gertrude was the daughter of the Rev. George Ross, rector of Immanuel Episcopal Church, one of the oldest Episcopal churches in America and sister to Declaration of Independence signer, George Till. Their children included four sons and a daughter.

Read was a career politician. He served as Delaware’s District Attorney, was member of the first and second Continental Congresses, presided over Delaware’s constitution convention in 1776, and was on the Delaware legislature council, among other posts. Read signed the Declaration of Independence although he opposed it.

In 1782 Read was appointed Judge of the Court of Appeals in Admiralty by the Confederation Congress. He was elected to the U.S. Senate in 1789, but resigned his seat in 1793 to accept the post of Chief Justice of Delaware, a position he held until his death on September 21, 1798. Read is buried at the Immanuel Episcopal Church in New Castle.
Posted by Country Girl in the City at 1:01 AM No comments:

Worth the Price of Admission - This Is It

Nobody was more surprised than I was when I thoroughly enjoyed this movie. I had avoided it for a couple of reasons. I don't consider myself a Michael Jackson fan not that I didn't enjoy dancing the night away to his music in my younger days. I was fearful of what a tribute movie might mean. While I am saddened by the loss of a favorite celebrity and I feel for their families and friends, most often I wish we'd simply let people rest in peace once they've past. This movie celebrates his art and craft and takes even casual fans on a delightful walk down memory lane. Thanks to those who persuaded me to go; I'm glad I didn't miss it.
Posted by Country Girl in the City at 3:28 PM No comments: