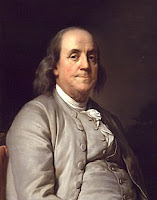 Benjamin Franklin was born 17 Jan 1706 in Boston, Massachusetts to Josiah Franklin and his second wife Abiah Folger. Franklin had 7 half brothers and sisters and 8 older siblings and a younger sister. Josiah was a soap and candle maker. Benjamin was apprenticed to his father for a couple of years, didn’t like the work, and at the age of 12 was sent to his half-brother James’s to learn printing. He remained in James’s printing house until 1723. He wrote under the pseudonym, Silence Dogood, for the New England Courant, his brother’s newspaper and took over publishing the paper when James was jailed for offending the authorities.

At the age of 17 Franklin ran away to Philadelphia. He lived and worked in London from 1724 to 1726 then returned to Philadelphia. By 1728 he had set up his own shop a friend. In 1730 Franklin entered into a common law marriage with Deborah Reed, took over publication of the Pennsylvania Gazette, and became the official printer of Pennsylvania. He would go on to become the official printer for Delaware, New Jersey, and Maryland.

While he himself had little formal education, in 1743, he proposed an educational academy that would lead to the founding of the University of Pennsylvania. He received honorary degrees from Harvard, Yale, the College of William and Mary, and Oxford. He was a free mason and a member of the Royal Society.

Franklin was also renown for his scientific prowess. Among his inventions are the Franklin stove, bifocals, a flexible catheter, and a duplicating machine. Famous for his lightning experiment where he flew a kite in a thunderstorm, his scientific studies didn't end there. He was the first to study the Gulf Stream and pioneered the diagnosis of lead poisoning.

Think he was finished? Guess again. Franklin was also active in politics. Among the political offices he held were Philadelphia postmaster, deputy postmaster for the colonies, member of the Pennsylvania General Assembly, president of Pennsylvania, member of Continental Congress. Between 1765 and 1776 he was London where he served variously as Agent of Pennsylvania, Georgia, New Jersey, and Massachusetts. In late 1776, he returned to Europe. This time as minister to France. He would return home to Philadelphia in 1785. In 1787 he was the oldest delegate to the Constitutional Convention and served as president of the Pennsylvania Abolition Society. 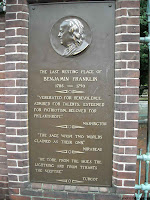 Franklin had three (3) children. His eldest son, William, born in 1731 was illegitimate. He had two (2) children with his wife Deborah. The eldest, a boy named Francis, was born in 1732 and died of smallpox in 1736. The youngest was a girl named Sarah born in 1743. Sadly, Franklin was forced to miss Deborah’s funeral. She died in December 1744 following a stroke; her husband was in London. Franklin died 17 April 1790. He and Deborah are buried in the Christ Church cemetery in Philadelphia.
Posted by Country Girl in the City at 1:01 AM No comments:

If you're looking a scary book to read, this is it. In Come Nineveh, Come Tyre, Drury paints a picture of what would happen to our democratic government if the communist party were to come to power. Many of the scenarios Drury weaves had a strong sense of realism for me. I could see events just like this unfolding in this country and Americans finding themselves in an unexpected and very unwelcome predicament. And then what would happen to this democratic experiment? Drury leaves the answer to that question up to the reader.
Posted by Country Girl in the City at 1:01 AM No comments: 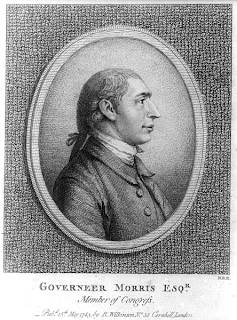 Gounerneur Morris was born 30/31 Jan 1752 at Morrisania, Westchester County, New York in what is now the Bronx to Lewis Morris II and his second wife Sarah Gouverneur. Lewis and Sarah had 5 children and Lewis had several children with his first wife, Sarah’s aunt, Katryntje Staats.

Morris was a constitution creator. He played a key role in the development of New York’s state constitution, is generally credited as writing the US Constitution, and drafted France’s initial constitution during the French Revolution.

The American Revolution was hard on the Morris family. His mother and two of his sisters remained loyal to the crown. One of his half-brothers was a British officer. But Gouverneur wasn’t alone in choosing independence; his half brother Lewis signed the Declaration of Independence. Morris represented New York at the 1778 Continental Congress before moving to Philadelphia in 1779. Morris wouldn’t return to the family estate in New York for two decades. He went into business with Philadelphia mogul, Robert Morris (no relation). In addition to their business ventures Gouverneur and Robert would establish a national bank on 7 January 1782.

Shortly after arriving in Philadelphia, Morris suffered a severely broken ankle in a carriage accident that required his left leg be amputated. The ever upbeat Morris seemed to take his misfortune in stride. As a bachelor, the wives of colleagues and friends tended to Morris during his recovery. The man noted for a having a way with the fairer sex got his first taste of heartbreak, falling for the very married Elizabeth Plater.

Morris would attend the Constitutional Convention in 1787 as a delegate from Pennsylvania. After the Constitution was ratified, he went to Europe to attend to his business affairs and in the end unofficially attended to governmental interests as well.

France was gearing up for a revolution as Morris became the US Minister to France in 1792. He is lucky he wasn’t guitoinned with the royal family. In addition to providing advice to the royal family, Morris was instrumental in planning their failed escape from France. France proved to be a tough station for Morris as he once again found heartbreak after an affair with Adelaide Fileul, Comtesse de Flahaut (“Adele”).


When he returned to America, he went to New York and reached Morrisania in December 1798. He entered the US Senate as a Senator from New York in 1800. It is unclear whether he was appointed or elected. He retired from politics in 1802, but not from public service. ”In 1807, Morris accepted an appointment by the state to a planning committee charged with creating a street plan that would control New York City’s future growth…..the result was the logical and eminently practical north-south east-west lattice we know today, extending from what was designated 155th Street in Harlem to the base of Manhattan at Houston Street.” (Miller, p. 196). In 1810, Morris was named to chair the commission to build the Erie Canal. They were unable to get federal funding for it so the state of New York financed it. Construction began 1817.

It was during this time that Morris finally settled down. The object of his affection was Anne Carey (“Nancy”) Randolph. Nancy was a Virginia gentlewoman and the object of scandal and derision. She was forced to leave her sister’s house after being accused of killing her out-of-wedlock child fathered by her finance (her brother-in-law’s brother). It is alleged that the infant’s remains were found. Speculation was that the child was actually her brother-in-laws: he demanded a trial…he was innocent. This was in 1792. She remained with the Randolph’s until 1805, when she was forced to leave. She eventually ended up in New York. Morris invited her to become his housekeeper at Morrisania. They were married on 25 December 1808 and on 9 February 1813 Nancy gave birth to a son, Gouveneur Morris II.

I got started reading Allen Drury novels in high school when my Dad gave me Anna Hastings, the tale of a young journalist in Washington, DC and I was hooked. Advise and Consent is one of a series of seven books centered around the same characters on Capitol Hill. Drury takes readers through the professional and personal trials and tribulations of high ranking politicians and their loved ones. All of the books in the series are well written, but Advise and Consent seems to be the one that I return to over and over. The fact that one of his main characters, Bob Munson, Senate Majority Leader is also the senior senator from Michigan is just gravy.
Posted by Country Girl in the City at 1:01 AM 1 comment:

I didn't realize what I was getting when I picked up Alan Taylor's American Colonies. As a history buff, with a title like that, my purchase was a no brainer, but what I wasn't expecting was his truly unique approach. If you're looking for a book about the colonies or the birth of a nation, look elsewhere. Taylor looks at the whole of the North American continent interweaving the colonial activities of the British, the French, and the Spanish so that the reader gets a sense of the three pronged approach that led to the settlement of North American by Europe. We learn about all of this stuff in school -- the American Revolution, French fur traders in the Northwest Territory, and the Spanish conquest of the Aztecs in Mexico -- but most are unable to relate these events to each other.....Taylor not only does this, he does it very well. Think you know your American history? Give American Colonies a read, a guarantee you'll learn something new.
Posted by Country Girl in the City at 1:01 AM No comments: