George Washington was born February 22, 1732 to Augustus “Gus” Washington and his second wife Mary Ball in Virginia. His father died when Washington was just eleven; his mother never remarried. His half-brother Lawrence, who had married into one of the colonies most prominent families, became a paternal influence on Washington. Washington received many opportunities at a young age due to his brother’s in-laws, among them becoming a surveyor of the Virginia frontier and later his post in the adjutancy corps.

Washington was discouraged from joining the regular British military on the grounds that he didn’t have the connections to make a successful career out of it. With his surveying background and knowledge of the Virginia frontier, the Virginia militia was fortunate to acquire his services. He served the Virginia militia well and when revolution came would be perfectly poised to become commander-in-chief of the Continental Army. During his surveying and militia days Washington was also amassing land, but would not have much time to devote to agriculture until much later.

Thwarted early in love, he had the unfortunate luck to fall passionately in love with his best friend’s wife, Washington would finally meet his match in Martha Dandridge Custis. Martha was a widow with two young children who had married into another of Virginia’s most prominent families. With his marriage at the age of 27 came a great deal of responsibility, Washington became guardian to his bride’s two children and their extensive inheritances in addition to Martha’s and his own holdings. While he and Martha had no children of their own, Mount Vernon was always full of family including scads of nieces and nephews. 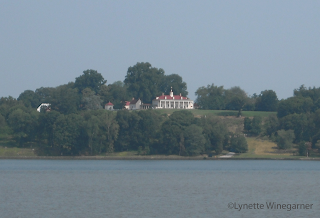 Surveyor, Commander-in-chief of the Continental Army, President of the 1787 Constitutional Convention, President of the United States, and Virginia planter, George Washington had a very varied career, but after two terms as President, he fulfilled his promise to Martha to leave public life and they returned to Mount Vernon to live out their days. Washington died December 14, 1799. Martha followed him on May 22, 1802. They are interred on the hillside at their beloved Mount Vernon.
Posted by Country Girl in the City at 9:00 AM