William Jackson was born March 9, 1759 in Cumberland, England. He immigrated to Charleston, South Carolina upon the death of his parents and was raised by Owen Roberts. 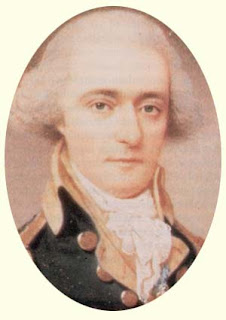 Jackson’s military service began early when he was appointed as a cadet to the 1st South Carolina Regiment in June 1775. A quick study he was commissioned as an officer in May 1776. At the age of 20 he was appointed aid to Major General Benjamin Lincoln and was promoted to captain on October 9, 1779. Because of his staff assignment Jackson’s promotion allowed him to hold rank as a major. Jackson was captured at the siege of Charleston on May 12, 1780. He was paroled to Philadelphia and was exchanged on November 9, 1780. After completing his parole, Jackson left the field of battle and became secretary to Washington aid, Lt. Col. John Laurens. An appointment from Congress as special Minister to the Court of France to negotiate the shipment of war supplies from Europe followed. Upon his return from Europe, Jackson became the Assistant Secretary of War, a position he resigned upon the end of hostilities.
He would be in and out public service for the rest of his career. After leaving the military, Jackson settled in Philadelphia and studied law under William Lewis but wouldn’t be admitted to the bar until June 9, 1788. In May 1787, he applied for and was granted the position of Secretary of the Constitutional Convention beating out one of Benjamin Franklin’s grandsons. After a return to business and law and another stint in Europe, Jackson became secretary to the first President of the United States. On November 11, 1795 he married Elizabeth Willing, daughter of one of Philadelphia’s most successful merchants. He served two presidents as the surveyor of customs for the port of Philadelphia before retiring from public service and becoming the editor of The Political and Commercial Register.
He died December 17, 1828 in Philadelphia and is interred at the Christ Church Cemetery. He was survived by his wife Elizabeth, and four of their six children, Ann Willing, Caroline, William, and Mary Rigal. Elizabeth died August 5, 1858 and was buried next to him at the Christ Church Cemetery.
Posted by Country Girl in the City at 9:00 AM