Meet the Signers - Springtime in Philly

In the spring of 1787, with the Articles of Confederation crumbling, 55 gentlemen, from 12 of the 13 states gathered in the Pennsylvania State House in Philadelphia, Pennsylvania. These gentlemen had the blessing of the current Continental Congress to review the Articles of Confederation and recommend changes that could be made to the Articles that would enable the states to remain united. Four months later they emerged with the Constitution of the United States and a new political experiment was underway. 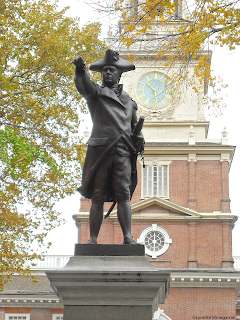 Over the course of the next several months, I'll introduce you to the 40 men who signed our Constitution. Yes, 40. The Secretary of the Convention signed the Constitution of the United States as a witness to the signatures of the 39 delegates who actually signed the Constitution they helped create. He was hired by the Convention to keep a record of the proceedings. His name was William Jackson and you'll meet him in "Meet the Signers - Convention Secretary," which I expect to be the fourth installment of this series.

There are the names you will expect to find....Washington, Franklin, Madison, and Hamilton. While others are conspiculously absent... Jefferson and Adams, both of whom were in Europe negotiating for support for their cause. And then there will be those, like William Jackson, that most of us have never heard of before. People always talk about the Convention, the compromises, the documents themselves; let’s take a different approach. Let’s meet the signers.
Posted by Country Girl in the City at 9:59 PM